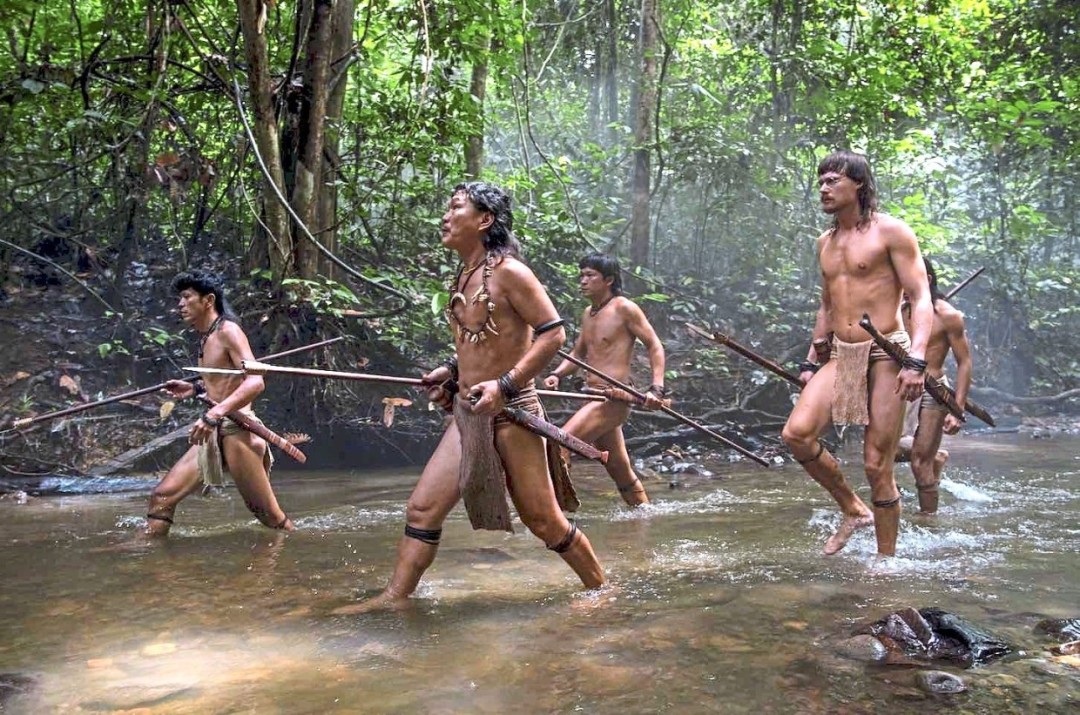 Penan and the Forest

I believe some of us must have heard about the Penan community. They are a tribe in Borneo, specifically in Sarawak, Malaysia. Penan community is one of the earliest indigenous people in Sarawak and they are famously called “the last nomadic tribe in Malaysia”; although most of them are living in settlements now. If I am talking about the Penan community here, to make it clear, I am actually referring to the nomadic one. Compared to other tribes in Sarawak, Penan is well known as shy, non-violent, and non-confrontational. There is no record that the Penan tribe has had a major confrontation with other tribes. Historically and distinctively, according to Wade Davis (1990), Penan is “the only indigenous people in Borneo with no history of headhunting.”

Since they have lived in the forest for ages, Penan’s culture has developed a symbiotic relationship with nature. For the Penan community, the forest is their everything. It is not only a place to find food, medicine, and daily activities but also a symbol of their tradition and identity.

One of their typical cultures is practicing a culture of sharing. Unlike modern-way of development, the Penan community develops their connection to the forest by preservation. They are against exploitative development such as logging on a major scale. Here, the Penan community ensures that they cut trees for survival purposes only. For example, they cut sago, a palm tree, for making food; but left a small one for the future; either for them in another circle of migration or for their future generation.

Also, they will share every food they have with everybody in their clan/group. There is a well-known story that even a fish is shared among them. Therefore, it is not a surprise to hear that the Penan has no “thank you” expression in their language because sharing is naturally internalized in their culture. Apart from dealing with plants, they also will only kill an animal for eating and will take care of their babies (in case it has) as a pet. Therefore, it is said that Penan is “the most peaceful, gentle, extremely interesting people” (Jeni Kendell 1989).

Penan and the Deforestation

From this cultural background, I want to further our discussion on how deforestation has come to structurally imbalance the life of the Penan community.

Currently, there is only less than 10% of primary forest in Sarawak following decades of deforestation. This scandal was called by Gordon Brown, Britain’s Prime Minister “the biggest environmental crime of our times.” Deforestation has been intensified since the 1980s when at one time Sarawak, as a state, had been the largest export of tropical timber in the world. The rainforest in Sarawak is renowned for its quality of solid wood, for example, Borneo ironwood (Belian), the hardest wood in the world. That is why the state views forests as an economic resource to develop the state. Since land in Malaysia is under the authority of the state, Sarawak state has exploited the forest tremendously.

Furthermore, the loss of primary forest has affected severely to the ecosystem, particularly in terms of its flora and fauna. However, the forest is a non-renewable resource. That is why currently the deforestation in Sarawak has slowed down because there is no significant primary forest left. Yes, there is a small part of the primary forest left and it is now inhabited by a very small number of the nomadic Penan.

Since deforestation has been a familiar picture in Sarawak, the Penan community has taken civil disobedience action by doing blockades, protests, and so on. They in fact have filed to the court in claiming Native Customary Rights (NCR). However, there is no significant decision to preserve the forest. The change of land—from the greenest primary forest to logging, dams, estates, and construction areas—eventually also changed the identity of the Penan community.

Now the Penan identity is synonymous with resistance, creativity, resilience, organization, and networking. The Penan community is no more a group of shy people previously forced to go deeper into the heart of the forest once deforestation enters their environment. Today they argue their rights in a modern way; legally and rationally. The change in their character symbolizes how the Penan community has transformed the event of deforestation from individual and collective trauma to cultural trauma. Deforestation is an accepted fact that it is irreversible and indelible in their history and memory. They take this traumatic event as a part of their identity.

Cultural trauma is defined by Jeffrey C. Alexander (2012) as “occurs when members of a collectivity feel they have been subjected to a horrendous event that leaves indelible marks upon their group consciousness, marking their memories forever and changing their future identity in fundamental and irrevocable ways.”

The main point here is that cultural trauma involves “the loss of meaning and identity” (Eyerman 2004) due to a shocking event. However, what makes cultural trauma distinctively different from physical and phycological trauma—both we could be called “lay trauma theory”—is the role of representation. Cultural trauma is not about “the nature of the event” itself, but also about how the event is represented in the public (Alexander 2012).

In this situation, cultural trauma appears in the public discourse for example in books, art, films, news, etc. The discourse will create a narrative (or counter-narrative) on how to situate the traumatic event. Therefore, Jeffrey C. Alexander rightly says that it is not about “the nature of pain” but about the gap between event and representation that defines cultural trauma. In other words, cultural trauma depends on how we interpret/construct the event in relation to cultural identity.

This coherent narrative has convinced the public that the Penan community has been discriminated against in an uncivilized way; their women were reported to be raped, their home (which is the forest) was destroyed, and their life was forced to be modern like another citizen. Therefore, it is easy for us to be sympathetic and empathetic with them and this collective emotion allows for creating social solidarity among the Malaysian public and international organizations.

First is the Penan community map.

Today this initiative has been strengthened with the help of other participants, technologies, and financial support. In addition, the Penan community also contributed to the project by organizing group meetings, providing logistics, and coordinating mapping activities on the ground. This project applies a participatory approach and uses drones to capture topographic features. In 2016, they confirmed all the information obtained by producing the most complete community map. They successfully recorded all local knowledge based on their oral culture involving the names and backgrounds of locations, graveyards, mountains, rivers, trees, valleys, and so on. The ability to name and to order every point of location is clear evidence they are “the custodian of the forest” (Langub 1996). This meaning-making ability comes from their cognitive map and collective memory.

With the community map, the Penan community can now argue their NCR claim that the forest is their real home in the legal system. As a primitive tribe, this is a success story for the Penan community. They elegantly create a counter-narrative to the authority who accused them of being a community without historical evidence. Memory recorded in their oral culture has been now transformed into documented facts. It is a result of “imaginative recollection” of the Penan community. This community map is really useful since it can also be used as a document for public awareness, advocacy, and educational purposes.

What is the Penan Peace Park (PPP)? It is a proposal to claim Native Customary Rights (NCR). The concept was conceived based on a series of discussions among the 18 villages engaged after observing the forest day-by-day logged by the timber companies. Here, PPP is a symbol of their struggle for recognition; from the time of blockades to taking the case to the court. However, the legal system is not a one-night solution. It takes time. Thus, the Penan community began to look for a long-term solution. Realizing these limitations, in 2009, rather than passively waiting for the court’s decisions, the Penan community proposed the Penan Peace Park. This was the origin of the project, which is “to be a place where humanity and nature are living in harmony, where the quality of life and livelihood are secured for both present and future generations, and a place where economic and human development are socioculturally and ecologically sustainable.”

With this aim, the PPP, is a symbol of a place in the Penan’s imagination. Here, the place is not just a thing of the world but more than that it is, according to Tim Cresswell (2015), “a way of seeing, knowing and understanding the world.” In addition, the place, in this case, the forest, has a cultural meaning to the Penan community. The PPP is materially a “ready-made explanation,” “a site of memory,” and “a primal scene” for the Penan community; they see the world through the forest. With a sense of place, the Penan community views the forest as “a field of care.” With PPP too, the Penan community can present its history and memory in a sense of authenticity. Here, PPP allows the other to connect with Penan’s cultural trauma, then create and shape social solidarity between the self (which is the community) and the other (which is the public).

As I bring our discussion to a close, I would like to summarize that the community map and PPP is a carrier of meaning to Penan’s identity. The community map has provided a counter-narrative, and displays a historical continuity for the Penan community, whereas the PPP is the location for the politics of space in asserting the Penan’s historical discontinuity by facing deforestation. Following Aleida Assmann (2012:), if we take time and space as a carrier of meaning, therefore the Penan community beautifully reflects the dimension of time and space via the map and the park. This is a way for the Penan community to recuperate from the cultural trauma of deforestation. Imaginatively, they have taken deforestation to another level; by doing an active remembering. In other words, they simply refuse to forget.

Brosius, J. Peter, 1997. ‘Prior transcripts, divergent paths: Resistance and acquiescence to logging in Sarawak.’ Comparative Studies of Society and History 39 (3): 468–510.

As an all-encompassing sociocultural phenomenon, memory plays an important role in various areas of social practice. The calendar of commemorations –national, religious, ethnic– seems to be ever-increasing. Remembering and forgetting are major themes in contemporary literature and art. Memory enjoys practically top billing in daily and weekly newspapers. It has become a controversial topic in politics and the public sphere (in the context of phrases such as ‘national tradition’, ‘Holocaust memory’, or ‘truth and reconciliation’). And memory even occupies us in our free time, in the form of thriving heritage industry. [Astrid Erll, Memory in Culture]